Passing in Society as an Art-form

POSE is a drama spotlighting legends, icons, and ferocious house mothers of New York’s underground ball culture(FX Pose). This series follows several characters that are trans and/or homosexual; and the trials and tribulations that come with being trans, testing positive for HIV, and/or being homosexual in a straight, cis, male world in the ’80s and ‘90s. There is a major focus in this series on “passing” mainly as a woman, but we see many instances where the characters in POSE are simply trying to pass in their day-to-day lives. We will evaluate the various “categories” or class topics the main cast of POSE may or may not pass in based on the reaction of their peers. This essay will also discuss how the cast reacts to the societal constraints put on them by both outsiders and their very own community. By comparing the characters to each topic we will not only disrupt what it means to “pass” but also get a glimpse of how this T.V. the show reflects reality as we know it.

In the Pilot episode, we see Elektra Abundance and her house robbing a museum of their royal garment exhibit in order to wear these clothes in the upcoming ball. The category for the particular walk they had the costumes in mind for, was royalty. The House of Abundance won just before they were taken away in handcuffs. Ironically all charges were dropped as the museum was too embarrassed to admit that a bunch of drag queens robbed them (POSE ).  Drag queens are often wrongly perceived as people who are just going through a phase or looked down on as lesser than because they do not fit the mold, they don’t pass in the heterosexual dominated world we live in now. This isolation from the mainstream public has led to these people creating their own society and underground community. The need to feel accepted and the glory that comes with winning the grand prize of a ball drove Elektra and her house to steal the costumes to secure their victory. Passing in the category or any category for that matter gives a sense of validity to their self-proclaimed identity as drag queens, trans or queer.

The Category is: Intersectionality 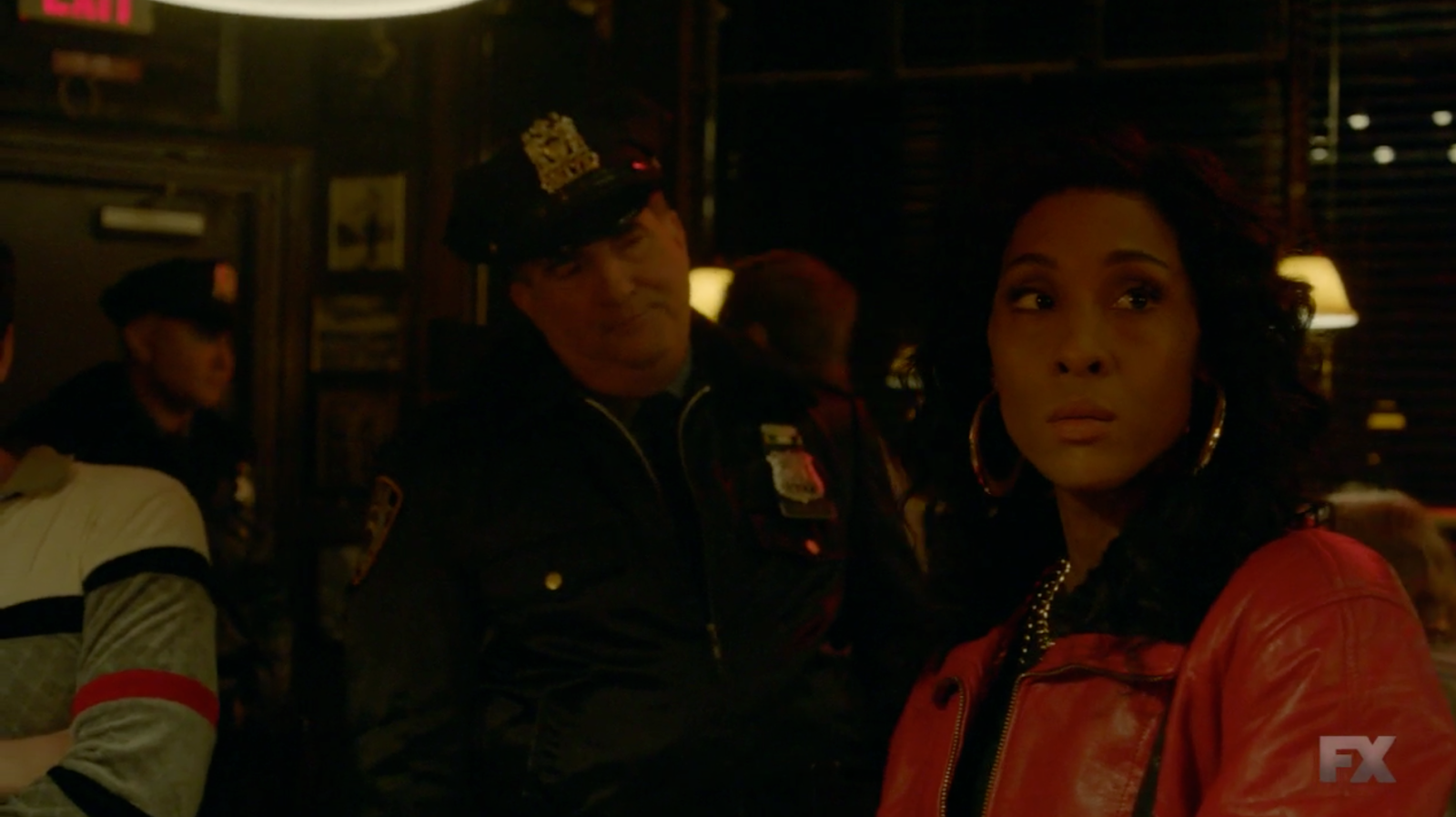 This image is Blanca getting kicked out of a gay bar for not passing. Blanca and Lulu are out celebrating at a gay bar, but quickly get stared upon and looked down on. They go to a white male gay bar but are also not able to “pass” there because they aren’t male or white. Blanca and Lulu fit in different categories, such as race, class, and gender. Given the circumstance of them overlapping in different categories, they are still unable to pass due to intersecting identities. In Vox’s article “The Intersectionality Wars” Crenshaw states “courts seem to think that race discrimination was what happened to all black people across gender and sex discrimination was what happened to all women, and if that is your framework, of course, what happens to black women and other women of color is going to be difficult to see.” (Crenshaw, 2019) This is exactly what Blanca is experiencing at this moment. Intersectionality

The Category is: Emphasized Femininity 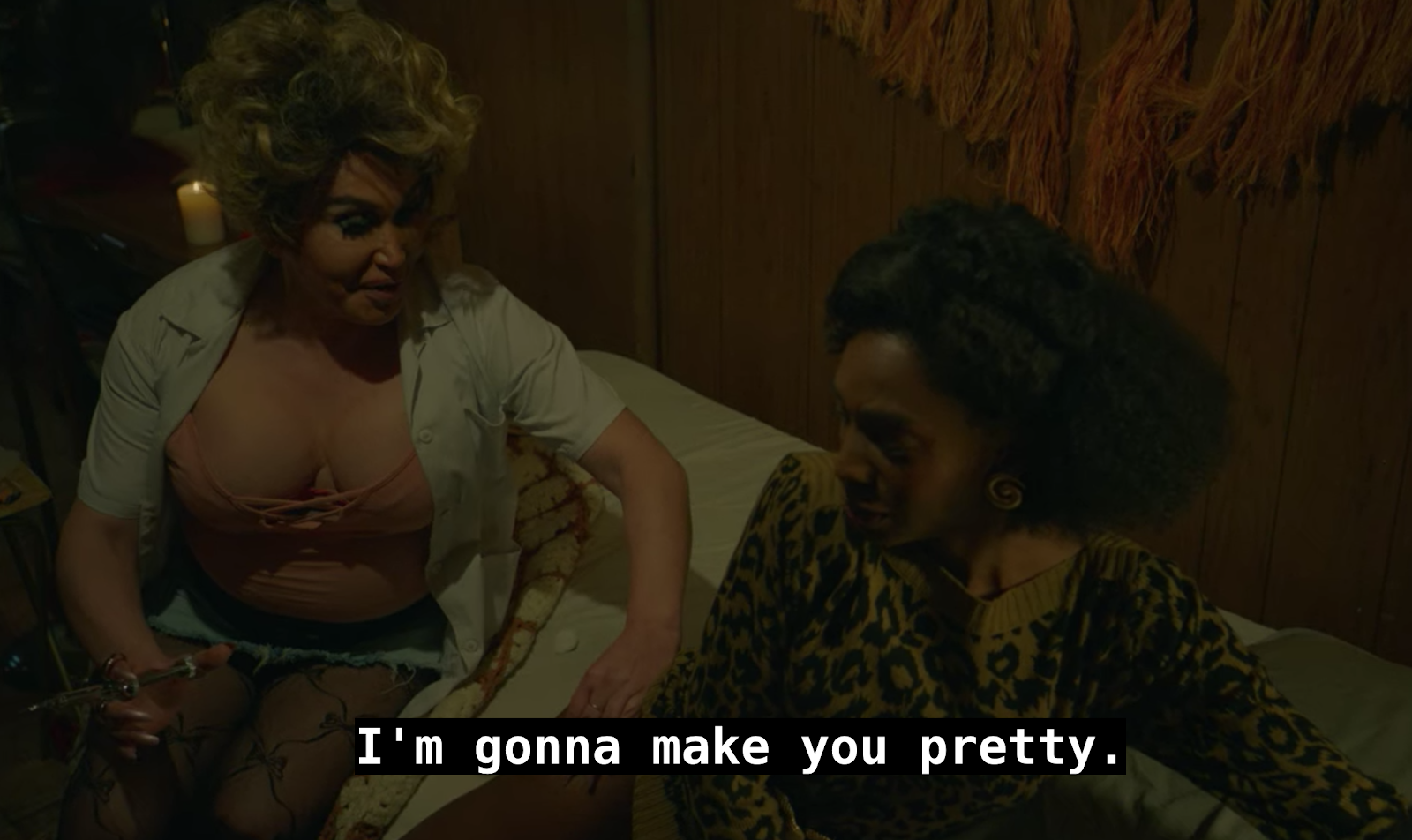 This image is of Candy Abundance getting injections from a rather sketchy practitioner ( to say the least). She was “read” or torn down at the ball for not being able to pass the body category, as she naturally has a thin, willowy frame. Her humiliation spurred her desperation for curves which led her to go get injections from the black market in an attempt to pass. You can see here that the sketchy practitioner says “I’m gonna make you pretty.” to make Candy know that she is going to get what she wants and to show her confidence in her skill to inject. The injector plays a part in Candy’s necessity to pass in the body category. Emphasized Femininity

The Category is: Gender Performativity This image is of Patty, Stan’s Wife, confronting Angel about her affair with her husband. Patty was perplexed as to why Angel was in a ball full of drag queens. After Angel explains it’s her community and home, Patty doesn’t seem to understand how Angel could be a drag queen since she’s a woman. Angel doesn’t fit the gender binary that Patty is using to separate people into either male and female categories. Angel doesn’t fit in either box perfectly and this confuses Patty, so much so that she demands Angel “prove” that she is in fact a trans woman. In Patty’s eyes, Angel is passing as a biological woman due to her look and embracement of emphasized femininity (for the most part). In the module on gender performativity we see Judith Butler’s mindset on gender is explained as  “instead of thinking of someone being a gender, Butler thinks of a person doing a gender.” In Butler’s book “Gender Trouble” Butler observes “There is no gender identity behind the expressions of gender; … identity is performatively constituted by the very ‘expressions’ that are said to be its results.” (Butler, 1990) In this instance Patty is definitely thinking of Angel as a gender, while in contrast, Angel is doing a gender because she identifies as a woman, so she purposely chooses to look and act in a way that she defines a woman should. Gender Performativity

The Category is: Gender Performativity Cont. 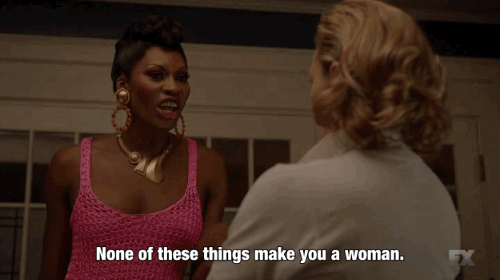 In this scene, the girls are confronted by a white, cis woman who tries to imply they are just men dressed as women and their attempt to pass is laughable. Elektra’s reading quickly shuts her down, but the deeper message in Elektra’s speech is not only for this woman individually but for anyone who has ever doubted their identity in general. In short, she (the white woman) may look, and act like a woman but that does not make her one. Elektra challenges this woman -who likely represents society- by confronting the idea that you should just accept what you are given at birth whether it be gender or sexuality. She asserted that by fighting for their true selves and not letting others’ inhibitions stop them, they have become stronger than this woman could ever imagine simply because they did not fall in line. Elektra doesn’t pass in this woman’s eyes since she does not fit the dominant form of Emphasized Femininity. ” Straight, white, cisgender, middle-class, able-bodied, thin and small” explained by Dr. McClearen in her lecture (around mark 1:18)

The Category is: Hegemonic Masculinity/Mythical Norms 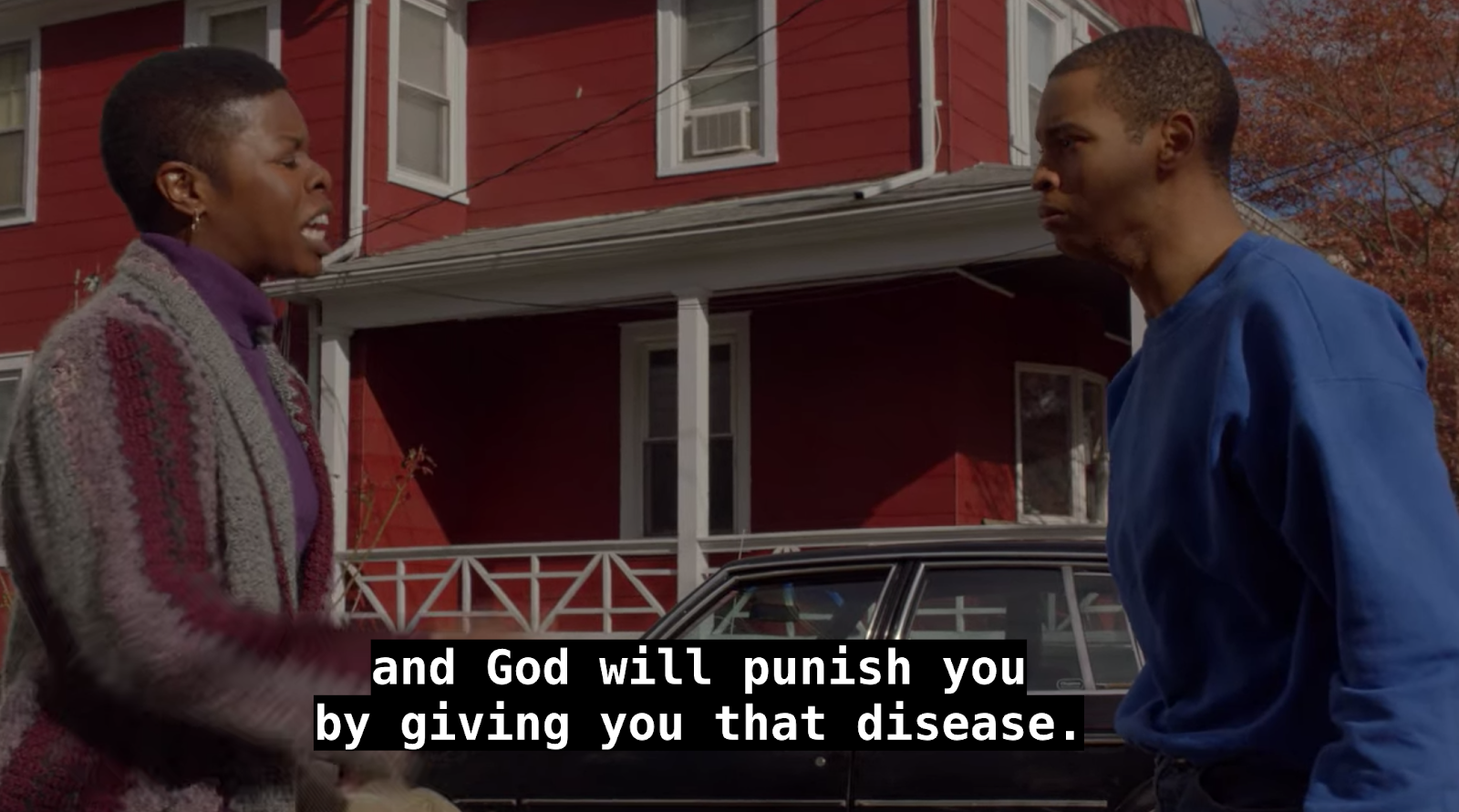 Damon gets kicked out from his home for getting caught with an all-male pornographic magazine and for getting caught leaving a ballet studio. Damon’s dad throws him outside and his mother follows. Damon’s mother explains that she went against his father’s wishes when it came to Damon dancing, but she didn’t like that he brought “filth” (the male magazine) into their home. They are unaccepting of Damon’s sexuality because it doesn’t follow the way they believe men should behave. Their internalized hegemonic masculinity leads them to believe Damon’s existence is a sin in itself. Both of his parents are focused on two different but equally defining aspects of Damon and are equally displeased with their findings.  Damon goes against Hegemonic Masculinity by embracing what is thought to be typically feminine characteristics and desires (e.i softer mannerisms, dancing, etc.) Damon is unable to pass in the Hegemonic Masculinity category in his parent’s eyes. Hegemonic Masculinity . In Lorde’s article “Age, Race, Class, and Sex: Women Redefining Difference” Lorde explains “ this norm is usually defined as white, thin, male, young, heterosexual, Christian, and financially secure. It is with this mythical norm that the trappings of power reside within this society.” (Lorde, 1980) Damon felt the need to hide the male pornographic magazine and his dance school attendance as he was unable to be his true self since he does not fit in with the mythical norm as his parents had tried to force him to.

The Category is: Hegemonic Masculinity Cont. 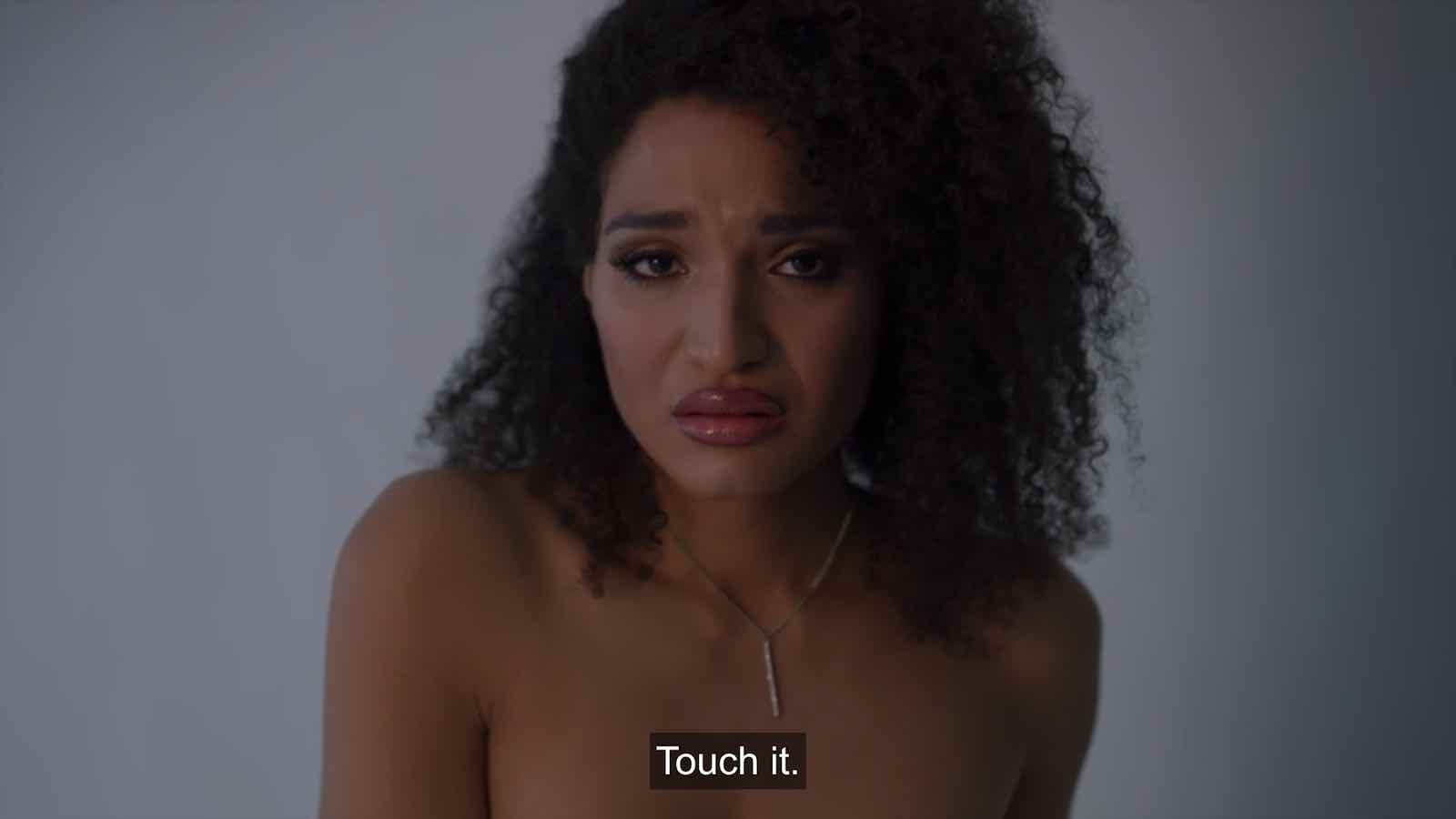 After strong encouragement from her house mother Blanca, Angel takes a shot at being a model. Unfortunately, she doesn’t have enough money for professional headshots when she arrives at the photo shoot, the photographer is all too happy to offer an alternative payment option. This involves Angel posing nude and having to touch her genitals for the photographer’s private collection. This puts Angel in a vulnerable position as she wants a “real shot” (POSE) in the modeling world, but given her past, she feels she has no other option but to allow herself to be taken advantage of if she wants to make it. The photographer “clocked” her or realized she was trans and decided to take photos of her to fulfill his own twisted desires. The photographer thought she did not pass as a woman and therefore felt he could take advantage of Angel. This is not to say he wouldn’t take advantage of a cis woman, but the fact that he felt he could take advantage of her because he thought she was in an inferior position and wouldn’t fight back for fear of backlash remains. Sadly, Angel is not the only one of the LGBTQ community to be taken advantage of, as a marginalized group they do not have the same protection as their white, cis, and straight counterparts. Later in the episode, Angel (with the help of her housemates) gets revenge on the photographer and still moves on in the modeling competition. While she initially felt powerless, Angel was quickly able to take that power back and destroy any notion that she deserved anything less than the best.

The Category is : Pass/ Fail 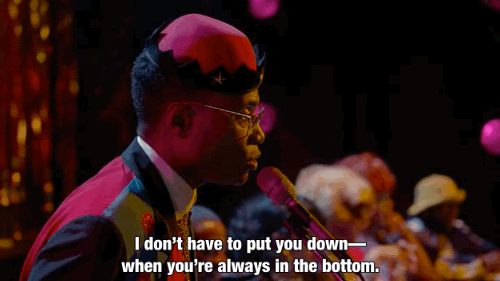 In every episode we see Pray-Tell either encourage or discourage the people walking in the various  categories. He is a revered member of the community and his opinion matters, at least during the ball. Pray Tell is a father figure to the children of the ballroom, which is why his opinion matters so much. Whether he is dragging the children, or praising them, the children have “passed” Pray-tell, thereby giving him the authority to pass judgment on them. What is interesting about Pray-tell is his open mindedness. Initially he was jaded from years of being oppressed because he didn’t pass in the mainstream world and yet once he was exposed to activism he could not be stopped. He refused to let societies preconceived notions and pressures deter him from being 100% him and that rebellion has made him that much stronger.

POSE is an eye-opening T.V. series that really sheds light on a community that is often marginalized and oppressed. Each character in POSE is able to show a different aspect of struggling to pass in every-day society. The empowerment that a show like this can inspire is priceless, and undoubtedly has given many people the motivation to leave societal hang-ups at the door. The focus should shift from why people do or do not pass, to why does anyone get a say in the matter at all? Once we can evolve into a society that just lets people be who they want, the possibilities are literally endless.

View all posts by aloooff