A League of Their Own is a heartfelt and uplifting film that carries messages of female empowerment for young women. The film takes place in 1943 as America is gearing up for World War II. With many of the country’s men being sent overseas to fight, the MLB faces a shortage of players. Walter Harvey, owner of the Chicago Cubs, decides to put together a Women’s professional baseball league. The film focuses on the struggles the women face in the previously male-dominated field of professional sports. Viewed through the lens of gender in media, A League of Their Own confronts the gender binary, gender performativity, and emphasized femininity, and many of the challenges the women face in the film because of their gender are still present in modern society. 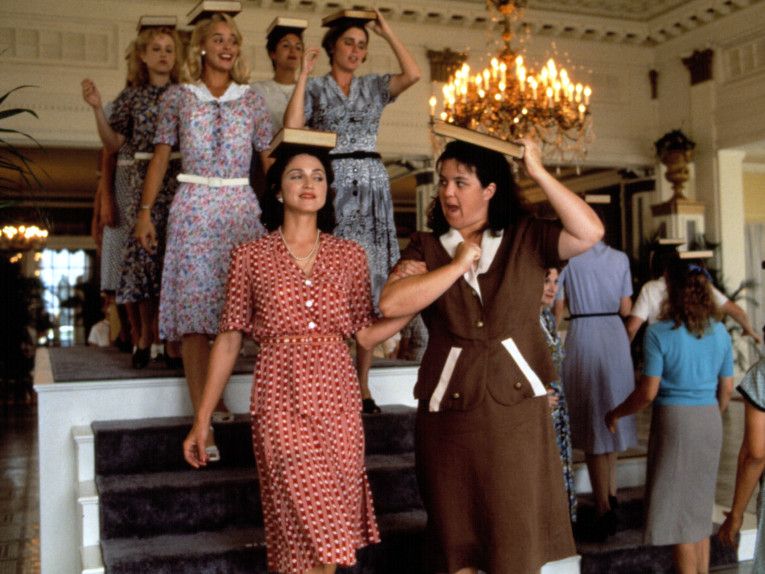 The idea of emphasized femininity is seen multiple times throughout A League of Their Own. It is the idea that women must conform to the needs and desires of men. In these scenes, the women in the league are required to take classes on etiquette in order to present the image the league is going for. Women must look and act a certain way and anything other than these traits is abnormal. Identities of emphasized femininity include straight, white, cisgender, middle or upper class, and abled bodied. Personal traits may include women who are passive, thin/small, caring, emotional, and are in need of protection. The idea of emphasized femininity is that women must conform to the desires and needs of men (“Hegemonic Masculinity and Emphasized Femininity, 2020).

The women featured throughout the film and amongst the teams in the leagues are almost exclusively white. There is one scene where one of the players overthrows the ball, and a Black woman is shown picking up the ball and throwing it back, a throw that was harder and faster than most players. It is sort of an awkward scene because that is the first and only time a Black female or person for that matter is depicted in A League of Their Own. This relates back to the identities of emphasized femininity which are geared towards white women.

The women on the team are shown as fitting into the typical norms of emphasized femininity — straight, cisgender women. Often objectifying them multiple times throughout the film as if they are not human beings but rather seen as objects for men. All-The-Way Mae is the centerfielder for the Rockford Peaches. Her nickname is deeper than just because she can make it all the way home, but rather because of her sexual relationships with men. One scene in the movie where the women are trying to come up with ways to attract greater crows, Mae is shown saying “What if at a key moment in the game my, my uniform bursts open and, uh, oops., my bosoms come flying out? That, that might draw a crowd, right?” and her best friend, Doris, replies back with “You think there are men in this country who ain’t seen your bosoms?” which is truly emphasizing Mae’s sexual orientation, aligning with the norms of emphasized sexuality and even how women are emotional and in need (Marshall, 1992).

When trying to recruit female baseball players to try out for teams, the scout a.k.a. Ernie Capadino, is reluctant to find ‘attractive’ players. Marla is considered unattractive by him, failing to meet the qualities of emphasized femininity that were pervasive in the 1940s. As such, he is reluctant to sign her to the team but does so anyway’s because despite her looks, she was a great baseball player.

The other players on the team are seen as very beautiful and attractive white women. Fitting into the stereotypical feminine appearance of women. At times, the appearance and attractiveness of the players are used to both their advantage as well as the leagues. The style of their uniforms were made to appeal to the general audience of men, as their uniforms would maybe attract more attention, meaning a larger audience. After it seemed as though the number of attendees were dwindling as time went on, the women came up with a minor solution. Catch a foul, get a kiss. This not only drew in a crowd, but it further emphasizes the attractiveness of the women.

The league is met with backlash from other women who suggest that the league will imbue women in American society with masculine qualities. They claim that the league will ruin women for the men returning from war and that letting women play professional sports will make them unable to perform their household duties. “One newscaster’s commentary on the girls being ‘masculinized’ was that it was ‘dangerous’ and caused the family ‘sexual confusion’. It is evident from these statements and assumptions that the role of women was a mother, a caretaker, a wife, a servant, and a cook.” (Sanchez 2001)

In the film, Rosie O’Donnell character, Doris, and Madonna’s character, Mae, represent breaks from the gender binary in their personalities. Whereas the rest of the girls on the team are more traditional outside of baseball, Mae is promiscuous and Doris is uncouth, both of which eschew the traditional gender binary. These two are also what is known as the opposite of a “do-nothing bitch” which in terms, is a woman whose sole purpose was to attract wealthy men who could provide for them (McClearn 2018). Clearly, both Mae and Doris were women who could live and provide for themselves without a man.

A League of Their Own illustrates a lot of the discrimination women face to this day because of gender stereotypes. While conditions have improved gradually, there is still a lot of progress to be made in not just sports, but workplaces in general.

View all posts by Sammy Yousif