By: Briana Stubblefield and Adrianna Schlaefer

The Hunger Games franchise is widely known for its empowered female protagonist, but it is also worth acknowledging the relationships between characters, like Peeta and Katniss, that dare to go against societal expectations. The franchise envisions a society in which male and female characters show a wide spectrum of traits that do not always adhere to conventional gender roles. The dystopian nation of Panem hosts an annual competition which forces 12 girls and 12 boys to fight to the death until only one remains. This public televised massacre of children establishes an environment in Panem, in which both genders have fair control and equal chances of death or survival. This franchise allowed for men to have a more feminist viewpoint and for women to enjoy the perspective of a more masculine female character. As a result, doors were unlocked for dystopias with strong female protagonists leading to a larger audience. Katniss must balance survival and romance in the arena where between her and Peeta, gender roles are practically reversed. “Peeta is a baker, a nurturer, a feeder. Katniss is a hunter” (Daniari, 2013). Peeta’s often maternal characteristics are described by the author of the series, Suzanne Collins, as a necessary complement to Katniss’ strength, her defense, and her rage. Based on these images displayed in our photo essay, you will see how Katniss and Peeta’s relationship defies gender norms.

Katniss and Peeta defy the traditional gender norms within media texts that the man always must be the rugged, outdoorsy one in the relationship and the woman must be the care-free, creative one. Katniss Everdeen loses her father at an early age and when her mother falls into a deep depression, she is forced to step up and provide for her family. Katniss has no choice but to step into the patriarchal role her father held, or her family will not survive. Katniss uses the hunting skills her father taught her to feed and protect her mother and younger sister Prim. The role of provider and protector are typically seen as masculine roles, reserved for the men of the family, but in the Hunger Games Katniss steps into this role out of necessity. Peeta on the other hand did not have to suffer quite the same hardships that Katniss did growing up. As the Baker’s son, Peeta’s childhood was comfortable for someone living in a poverty-stricken area like District 12. With his family’s stable source of income, Peeta had more freedom to pursue artistic pursuits like painting. Peeta’s circumstances have allowed him to pursue things that are typically seen as more feminine and not typical interests of the male protagonist. 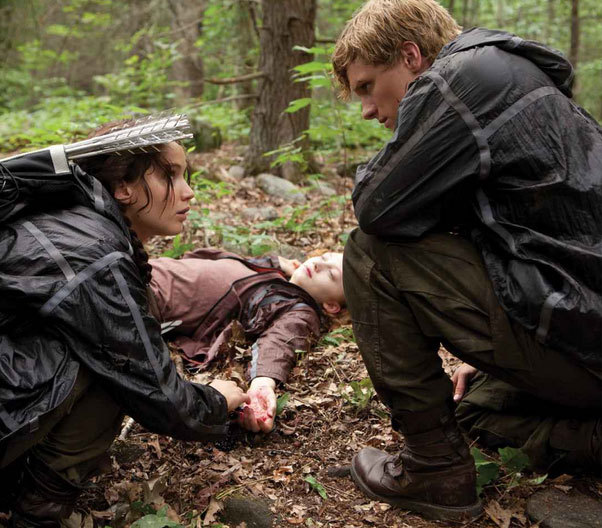 At the start of their training, Katniss feels she is going to thrive on sheer independence and strength. Katniss stated “A kind Peeta Mellark is far more dangerous to me than an unkind one. Kind people have a way of working their way inside me and rooting there. And I cannot let Peeta do this. Not where we’re going.” Katniss said this prior to her and Peeta truly forming a romantic relationship, and we see that she is displaying defensiveness instead of being passive, which is not a typical gender binary. Peeta is yes kind, but also is a liability to Katniss, although it does not take much time for her to see him in another light. “Katniss and Peeta face challenging decisions about whom to trust in the Capitol, and whether they can trust each other. Katniss slowly discovers that she must rely on Peeta for a new kind of survival” (Skinner, 2012).

Katniss takes on a commonly male role with hunting and then had to switch to being gender performative in the arena, due to a method of survival even though she was coerced into it. During interviews she is forced to wear a dress, makeup, and act and talk in a feminine way. Though she is uncomfortable to put on this performance of a refined woman, she must do it, because her and Peeta now represent “star-crossed lovers.” Her relationship with Peeta is also publicized to the point where “she becomes angry with Peeta for making her into an object of affection, thinking it makes her seem weak” (Gilmore, 2013). Even though he is sincere in his feelings towards her, the way their relationship is set up means survival at the time for Katniss.

In the first Hunger Games film, Katniss finds Peeta in a near-death state after suffering a severe injury. The Gamemakers give the Tributes the opportunity to meet at the Cornucopia to get something they desperately need. Katniss tries to go to get Peeta the medicine he needs, but Peeta pleads with Katniss to stay. He doesn’t want her to risk her life for him and Katniss challenges him, “You would do it for me? Wouldn’t you?” In this moment Katniss establishes that she and Peeta are on the same level in this relationship. She does not need Peeta to protect her or tell her what to do. This is a partnership between two people who look out for one another and neither is inferior to the other. In this example Katniss and Peeta defy the traditional gender norm of “damsel in distress” in that Peeta is the one in the relationship that needs “saving” and Katniss comes to his aid. Peeta needs to be cared for and protected and Katniss takes on the role of provider and protector.

“Peeta’s willingness to sacrifice himself, placing him in a position of both moral superiority and active decision-making, aligns him with the subject position of the desirer” (Baker, 2019). Katniss’ own inclination to sacrifice herself as well – finally tears down the framework of the Games. They planned to eat poisonous (nightlock) berries, proving that they are prepared to accept the greatest surrender for each other. At this point they are mutually rejecting gender norms, by not following the culturally acceptable actions that the Games typically have in mind, one gender winning. This fatally admirable demonstration reveals that there is undoubtedly more to them than mere savage and competitive impulse to win. Their allegiance pressured the Gamemakers to alter the rules on the spot.

Katniss and Peeta’s relationship quickly brings them popularity in the nation of Panem and people root for the star-crossed lovers. Their survival depends on how convincing they are at being in love. This is easy for Peeta, who is wholeheartedly in love, but more challenging for Katniss who feels conflicted and just wants to return to her family. In this way, Katniss and Peeta’s relationship defies the gender norm that women are typically the ones in the relationship who are blinded by love and willing to give up everything, while the man is more hesitant to commit and make those same sacrifices. For Peeta, the star-crossed lover’s story is not an act, it is how he truly feels. For Katniss, it is just a way to survive in the arena, and beyond.

The romanticized representation of gender for men is always the bold attractive hero, whereas for women it is being fragile and insecure which makes her the center of the hero’s desire. This image is a depiction of Katniss as the skillful hunter and a “heroine who refuses to conform to traditional expectations of gender” (Gilmore, 2013). With Peeta by her side with no equipment or armor, Katniss is shown as the protector, truly defying gender stereotypes and solidifying her role as the mockingjay for the rebels.

Throughout the Hunger Games franchise, Katniss is notorious for being closed-off and mysterious. She has dealt with a lot of pain in her life, and it is against her nature to show emotion and open up to strangers. Peeta is softer, kinder, and more open than Katniss in this way. He fights with his words rather than a weapon. He appreciates beauty and finds the goodness in the people around him. Katniss sees it as her role to keep Peeta alive in the Games and in life because he is more vulnerable and, in her eyes, a better person than she is. Meanwhile, Peeta encourages Katniss to be more open and share her emotions with him so that he might help carry her burden. In typical heterosexual romances on screen, the man is typically portrayed as “the rock” on which the woman relies on and the woman is the one who encourages the man to be more open and sensitive. As author Nancy Taber writes, “Under these norms, males are under pressure to conform to expectations that they be powerful, handsome, muscular, capable, and unemotional while females are to be attractive, fragile, slim, caring, and emotional” (Taber, 2013). This is just another way in which Katniss and Peeta’s relationship defies gender norms. 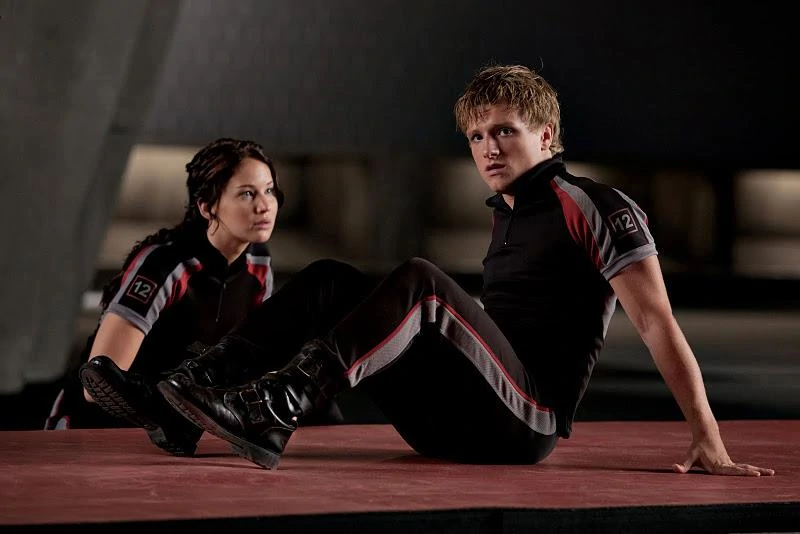 Peeta: Yeah. I just don’t want them to change me.

Katniss: How will they change you?

Peeta: I don’t know. Turn me into something I’m not. I-I-I just don’t want to be another piece in their game, you know?

Katniss: You mean you won’t kill anyone?

Peeta: No… I mean, you know, I’m sure I would just like anybody else when the time came, but I just keep wishing I could think of a way to show them that they don’t own me. You know, if I’m gonna die, I wanna still be me. Does that make any sense?

“Over the course of training and during the games, Katniss and Peeta develop a complicated friendship, one that becomes central to the plot and to Katniss’s character development” (Mccord, 2012). This conversation between Katniss and Peeta, demonstrates how he was not willing to change who he is to conform to what society (the games) have in place for him. We see contemplation in his eyes in the image, when they are training for the games, and can assume that his identity means more to him than a fake persona. As he is naturally weaker, kinder, and more vulnerable, he has found himself in a situation where he is not considered a high threat to other contenders. So as much he may not want to kill or not be owned by the Capitol, he is pressured into developing an image that is identifiable and desirable to the citizens of the Capitol. Hence, Katniss does not necessarily fit into a structured form of feminine, but must do the same as Peeta, conform to patriarchal society and their gender stereotypes.

Katniss Everdeen and Peeta Mellark defy gender norms that exist in media culture by reversing roles in their relationship. Katniss rejects emphasized femininity and refuses to conform to societal expectations of women. She is unapologetically ruthless and lives to protect her loved ones. Peeta also refuses to embrace hegemonic masculinity in the way that society expects of him. He fully embraces being the compassionate, sensitive one in the relationship. He shows Katniss how to find beauty in their cruel world while allowing her to take on the typically masculine role in their relationship. By opposing the standard constructs of ‘masculine and feminine,’ Peeta and Katniss also refused to embrace these unorthodox characteristics and attitudes, showing the power of the conventions of gender in society.

View all posts by ravenclaw1