By KeiAnna Lee and Claire Garza

The Bachelor is a relationship reality competition series that began in 2002 and has since become a major franchise spawning many spin-offs. Its massive fan base throughout the nation and even the world has given it a power and platform unlike any other reality television shown; unfortunately, though, it is known for being predominantly white and straight, with an emphasis on conservative traditions and very little progression in its nearly two decade run. The franchise has found its success in pushing a heteronormative narrative dependent on creating an image of a hyper feminized woman ending up with a stereotypical masculine man. This dynamic reflects the ideals of its audience but, as a younger generation is introduced to the franchise, it faces more pushback and a call for change. 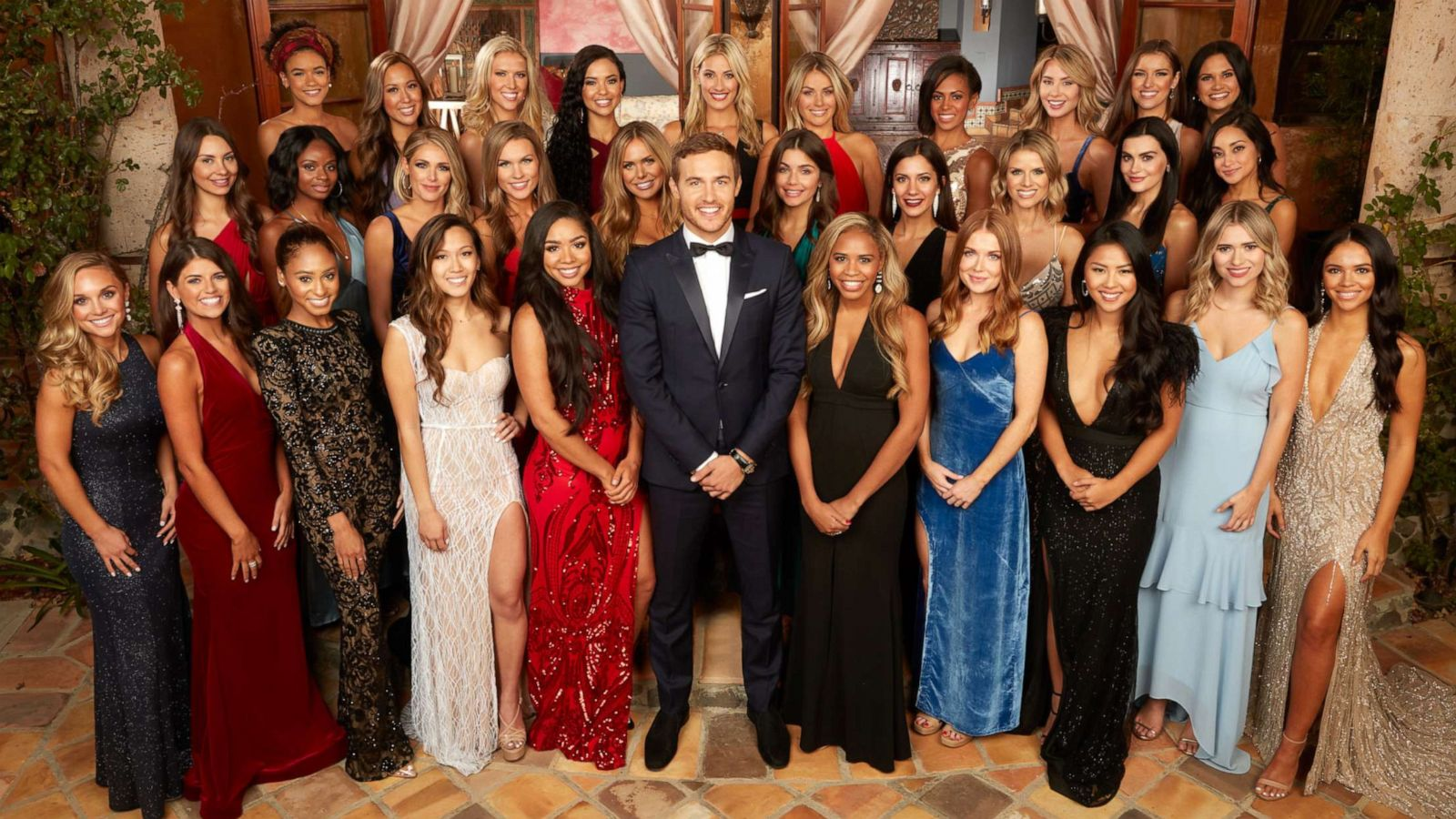 The problem of heteronormativity arises right at the premise of the show: for the Bachelor, 20-30 eligible women come to compete for his affection. The Bachelorette functions in the opposite fashion, and the many spinoffs – such as Bachelor in Paradise – normally alternate each episode between men choosing a women to stay the next week or women choosing a man. The entire competition aspect is designed for a heterosexual couple, and that structure was never challenged until Season 6 of Bachelor in Paradise, which will be discussed later in the essay. Many watchers of the show have asked for format changes that allows for some queer representation, but those in opposition say it isn’t possible, or else the show would not be the same. And therein lies the problem. Bachelor viewers and producers alike don’t see queer representation as something that is needed or efficient. Chris Harrison, the famous host of the Bachelor, when asked about having a gay bachelor, “The question is: Is it a good business decision? I just spoke at U.S.C. the other night, and I explained it like this: Look, if you’ve been making pizzas for 12 years and you’ve made millions of dollars and everybody loves your pizzas and someone comes and says, ‘Hey, you should make hamburgers.’ Why? I have a great business model, and I don’t know if hamburgers are going to sell.” It is a conservative and damaging ideology that making money from placating a less accommodating demographic is more important than representing people that are also making up a big portion of the audience. The Bachelor not only promotes heterosexuality as the only and ideal option, but shows no inclination to making any changes to the show, which means they don’t see it as a problem that needs fixing.

The show exemplifies emphasized femininity with its female contestants. They’re always dressed in full hair and make-up, they tend to be small, white, straight, cis, and the show highlights their emotional sides. The Bachelor “constructs [this] ideal femininity” that puts white women at the center of desire and marriage (Kelly, 2014, p. 407).On the opposite end, it also shows hegemonic masculinity at its finest with white, cis, muscular men in competition over women (in spin-offs). With the show emphasizing their strength, confidence, and competitiveness. These two extreme forms of masculinity and femininity in the show present a stereotype of women that sees them as objects to be won who all have similar personalities or archetypes season to season and men as the winners of these women. This extremely gendered expression then leads to an imbalance of power.

The power dynamic The Bachelor was founded on is best said in Brophy-Baermann’s words; “Men are powerful because they do the choosing. Women’s power, if any, comes from being chosen” (Brophy-Baermann, 2005, p.25). The basis of the franchise will always be that one man was eventually supposed to pick a woman from a group to marry while the women were to compete amongst themselves for the ‘honor’ of being chosen. While it should be noted the show went on to have spin-offs where the genders were flipped, the end result is still the same. A man is the one to propose to a woman and have a happily ever after. This act will always put the man in the ultimate position of power as he is the one who has to approach the subject. This changed for the first time ever last year, in 2019, with the lesbian couple Demi and Kristian.

The Gaze and The Audience

The show clearly enforces a specific type of beauty standard informed by the male gaze. The camera “focuses on women’s breast, buttocks, and legs…” or the show creates scenarios “for the women to expose their bodies such as pajama parties, water rides in amusement parks, and interactions in hot tubs and pools” (Yep and Camacho, 2004, p.339). This sexualization and objectification of women further lends itself to promoting stereotypes and power imbalances as it makes it seem like attractiveness and desirability is the main selling point instead of the ‘love’ everyone is supposedly looking for.

While the male gaze is present, it’s not the only perspective shown. “The sexualization of men, too, does occur—on both The Bachelor and The Bachelorette” (Croner, 2014, p.27). The men are primarily muscular and attractive and are also often made to remove their shirts or participate in athletic activities in order to create a sexual narrative. This is most likely due to the franchise being “primarily directed towards female viewers” (Croner, 2014, p.27). The female gaze that influences the Bachelor franchise also pushes the stereotypes of emphasized femininity and hegemonic masculinity as black female audiences are invisible resulting in white, middle-aged female audiences being the primary demographic and wanting this more conservative version of the show while younger, newer audiences call for a more progressive show (Monk-Payton, 2019). The male gaze behind the camera and the female gaze of the audience result in a franchise heavily built upon the objectification of its contestants though newer audiences are calling for change, the Bachelor franchise is very rooted in its heteronormative ideology.

A Thin Attempt at Representation

The common rebuttal of this argument comes from Season 6 of Bachelor in Paradise in which one of the contestants, fan favorite Demi Burnett, dates and gets engaged to her girlfriend at the time, Kristian Haggerty. The issue with this form of representation though, is that it was so staged and fabricated that it seemed more like a form of tokenism to combat increasing criticism of the show’s overt heterosexuality. The show broke its own rules of only bringing former Bachelor or Bachelorette contestants onto Paradise, instead bringing Kristian, who has no Bachelor connection, into the show for the sole purpose of dating Demi. Although it was hailed as a groundbreaking and encouraging event – and it is – it seems more like an attempt to placate an increasingly progressive audience than an actual attempt at changing its traditional ways. Demi wasn’t first bisexual character on the show; that honor goes to Jaimi King on Season 4 of Bachelor in Paradise. However, the show’s portrayal of Jaimi was not necessarily revolutionary, as they edited her to be hypersexual and indecisive, two very harmful stereotypes to the bisexual community. Jaimi was also subjected to countless jokes and insensitive comments while on the show.

The Bachelor franchise is a guilty pleasure for many; the drama, the romance, the allure of a happy ending are all enough to draw anyone in on a Monday night. Its appeal, however, simply does not cancel out its flaws. The fact of the matter is, the Bachelor franchise promotes an outdated ideal that leaves women in submissive positions and men in dominant, despite their weak attempts to give women “power” (an assertion that is literally made in the promo for the first season of the Bachelorette). It also promotes hetereosexuality as a norm with weak attempts to represent the LGBTQ+ only recently beginning and only through the more palatable form of a bisexual woman. The show’s pandering to its conservative audience is not only antiquated, but also damaging, and intentionally “conflicts with a feminist consciousness, reintroducing into our current vernacular and our current televisual landscape oppressive gender roles and a plea for heterosexuality.” (Croner, 2014, p.45) The Bachelor demonstrated its appeal through its longevity; the hope is that soon it will recognize its platform and more accurately represent the people that keep it going.