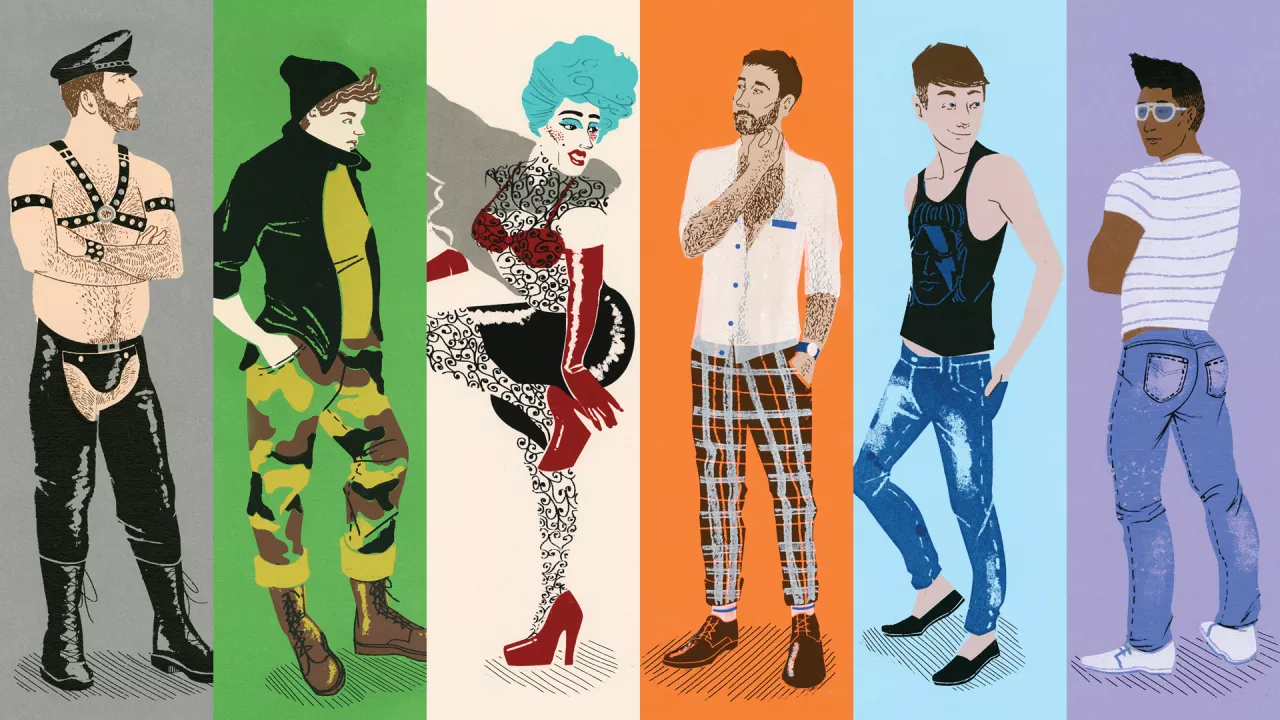 A topic we covered thoroughly in Gender and Media Culture is representation in the media (i.e., the way a certain group is portrayed through television, film, etc.). Unfortunately, representation often leads to the stereotyping of certain peoples, which, according to a research journal entry from Sheng Kuan Chung (2007), is defined as “a cognitive process by which humans simplify complex information and make sense of the world.”

The pictures below will feature film and tv show characters (primarily homosexual male characters) that have positively influenced the LGBTQ community. An argument we’ll be making throughout this essay is that gay male characters being shown in media texts, regardless of how many stereotypes are given to them, positively encourage members of the LGBTQ community to more comfortably express themselves. According to a research study conducted by Sarah C. Gomillion and Traci A. Giuliano (2011), affiliate researchers from the University at Buffalo, “media role models influence the realization, development, and expression of GLB (gay, lesbian, and bisexual) identity.”

A common stereotype portrayed in the media is the homosexual male stereotype, and a notable example (Kurt Hummel from the show Glee) is shown in the picture above.

Throughout the show, Kurt falls into multiple gay male stereotypes such as dressing fashionably and focusing on his appearance. According to his Fandom Wiki page, Kurt also enjoys singing and dancing and was raised by one biological parent who’s unsupportive of his homosexuality (in this case, his dad). These qualities/circumstances can be seen in many other media texts and may overall be considered stereotypical. In addition, he has more female than male friends due to the bullying he faces from the jocks and other guys in the school.

Although Kurt Hummel falls into various gay male stereotypes we see perpetuated in the media, he may actually be encouraging viewers to come out. According to a research study conducted by Phillip M. Ayoub and Jeremiah Garretson (2017), researchers from Drexel University and California State University, “media images of openly gay people function as role models, not only encouraging a domestic debate but also helping more gay people to be open about their sexuality within their social networks and, in turn, with other members of the public.”

Along with the common gay male stereotypes comes the “gay best friend” (GBF) trope. Oftentimes, GBFs are the antagonists or even just the background characters in media texts. These characters often show support and are there for their straight female friends for whatever it is that they need, whether it be advice on their fashion styles or dating lives. The GBFs rarely (if ever) talk about their personal lives and only show up in a scene when the female character is in need of assistance.

Damian (played by Daniel Franzese) from Mean Girls is the perfect example of a gay best friend. He is always spending time with his friend Janis and occasionally with the film’s lead, Cady. There really isn’t much backstory given to his character, and he, in a sense, ends up on the sidelines. While not every LGBTQ community member could exactly relate to being someone’s GBF, characters like Damian are still able to help these LGBTQ peoples find themselves.

According to an article by Entertainment Weekly titled “The evolution of the gay best friend in romantic comedies,” Franzese, who came out to the public a decade after the movie was released, said that he wished he had had someone like Damian to look up to when he was younger, as that character probably would’ve made high school better for him. This suggests that, through a gay male character being portrayed on screen, someone was able to, for lack of a better phrase, find themselves.

Another great example of a GBF is Tanner (played by Michael J. Willett) from the movie G.B.F. In the film, he technically doesn’t embody the traits of a typical GBF until he gets outed. And once the popular girls in the high school find out about his true identity, they make it their mission to turn him into their gay best friend by giving him a makeover.

Like Tanner, many of the LGBTQ community start off as awkward and uncomfortable with their identities. Not every gay male may end up as the token GBF, but they can certainly relate to the feeling of confidence Tanner feels when he receives a makeover and walks with the popular girls through the halls in school. Getting accepted by said popular girls allowed for Tanner to finally feel comfortable with himself, in his own, true skin.

Films like G.B.F. allow for LGBTQ viewers to relate with Tanner and, by seeing the sudden confidence he gains by being true to himself, these viewers can be encouraged to do the same and more confidently self-identify.

In the 2012 film The Perks of Being a Wallflower, Patrick (played by Ezra Miller) becomes a GBF to the main character, Charlie (played by Logan Lerman). Patrick embodies a different stereotype in this story compared to the typical gay male stereotypes in media; rather than coming out fully and having a sort of redemptive story arc like what’s typically seen, he’s mostly closeted throughout the film and is barely out towards the end.

At the beginning of the film, Patrick is introduced as “nothing.” Peers often make fun of him and use that term as his nickname. Throughout the story, he is seen secretly dating a football player who is also closeted, and the couple basically live double lives as they have to act “straight” in front of their friends. And rather than being able to come out to his friends and family on his own terms, he is outed when Charlie catches the couple kissing in private.

His nickname, “nothing,” symbolizes what those within the LGBT community feel like compared to others. Some might argue that they begin to feel invisible and misunderstood. But, thanks to gay male characters in the media, viewers are able to relate to someone like Patrick and see themselves within him. Despite the struggles Patrick faced, viewers can be encouraged by the person he is deep down.

The Academy Award-winning 2016 film Moonlight is a more recent media text that features a gay male character. The film shows three different chapters of the main character’s, Chiron’s life. The first features him as a child, the second as an adolescent, and the third as an adult; each played by Alex R. Hibbert, Ashton Sanders, and Trevante Rhodes respectively.

This character is breaking away from the usual gay male stereotypes (he’s depicted as being very strong and eventually independent) while still, in a way, embodying traits of a queer person of color. The film “depicts a journey of self-discovery and a queer love story which actually feels probable and tangible” (Coffigny, 2017). A type of antagonist at first, Kevin is Chiron’s friend who later turns into a love interest once they reconnect as adults. Because of his background and quiet personality, Chiron never fully explored his sexuality in fear of hate and judgment. In the final chapter, his story becomes more stereotypical as he becomes a drug dealer. However, he still has his internal struggles with his identities, and the outer layer is just for show.

Coffigny (2017) explained that “adding such harsh socio-economic background and a moving storyline centered around gay love seemed to be an impossible feat. Yet somehow this film managed to touch each one of these areas perfectly.” This movie is able to let the QPOCs feel heard and it’s definitely a step in the right direction for the entire LGBTQ community. As Coffigny said, “Watching Moonlight, I suddenly felt represented.”

As we’ve touched on in class, initial depictions of members of the LGBTQ community in the media often ridiculed these characters and gave them tragic endings. However, according to an article from The New York Times called “14 TV Shows That Broke Ground With Gay and Transgender Characters,” certain positive depictions of LGBTQ characters began to emerge a couple of decades ago.

The article began its listing with the 1972 film “That Certain Summer,” which is considered the “the first sympathetic depiction of gay people on television.” The story is about a divorced father having to hide his male lover from his teenage son. The film was considered groundbreaking and helped start the journey towards “more accurate story lines and fewer stereotypes.”

Other films and media texts that followed “That Certain Summer,” despite their stereotyping of gay characters, helped LGBTQ community members essentially find themselves and self-identify. According to the study by Ayoub and Garretson (2017), “an unparalleled increase in the representation of gay people in news, television, and movies occurred in the 1990s.”

Another film that many might consider groundbreaking is the 2005 romance Brokeback Mountain. According to an article by MTV titled “10 Years After ‘Brokeback Mountain,’ What Has Changed For LGBT Rights?,” although the film wasn’t incredibly explicit with its depiction of romance between the two gay male leads, it “had audiences hooked, with the film eventually earning Academy Awards for Best Director, Best Adapted Screenplay, and Best Original Score.”

According to a research paper written by Ralph Roughton (2014) from Emory University, “no fictional gay characters have had the impact that Ennis and Jack did in the 2005 film ‘Brokeback Mountain.’” The paper goes on to say that “the plights of Ennis and Jack touched, and stirred, something in our collective psyche and evoked a national conversation about gay men, about our images of American manhood and masculinity, and about ourselves and our culture of homophobia and intolerance.”

The research paper suggests that this film was able to challenge “stereotypes about masculinity and it made people feel the devastating effects of homophobia.” Through Brokeback Mountain, members of the LGBTQ were able to feel more accepted, and a national conversation began.

According to an article by the South China Morning Post titled “Leslie Cheung in Happy Together, plus 6 other Asian movies celebrating LGBT romance,” the stigmas and cultural taboos that exist in the U.S. cause Asian LGBTQ characters to rarely be shown in the media. However, media texts like the 1997 Chinese film Happy Together were able to push past some of those stigmas, and “several filmmakers have made equally beautiful films celebrating LGBTQ+ characters around Asia.”

Happy Together is, according to the article, “…the most-acclaimed gay Asian film” and was screened in multiple film festivals. The film is about two Asian men who struggle to make things work in their relationship and find themselves drifting apart. Because of its “bittersweet realism,” as the article puts it, the film avoids many of the gay male stereotypes commonly seen in American cinema. Because of Happy Together’s wide reach and acclaim, it potentially had a positive impact in terms of LGBTQ acceptance throughout different parts of the world.

As mentioned previously in this essay, seeing gay male characters in television and film allow for LGBTQ community members to feel more comfortable and confident with their self-identity. In addition, seeing someone of their own race in the media allows for these LGBTQ peoples to feel even more comfortable with themselves. According to the research paper by Gomillion and Giuliano (2011), “… the notion that a role model’s similarity to an individual is an important predictor of the role model’s influence has been confirmed by a variety of studies demonstrating that people are more influenced by role models of the same gender or race.”

It’s no secret that stereotypes can be harmful to various minority groups; in this country alone, we’ve seen countless acts of violence and discrimination committed throughout our history. However, the fact that many media texts are more comfortably and more positively representing gay characters has allowed for LGBTQ peoples of all types to self-identify, be truer to themselves, and have the courage to lead our society towards love and acceptance.

View all posts by helloannnna